Part 3 of the story

Little Gnome fetched his lantern and slowly and carefully started to climb up the winding stairs – up and around, around and up, climbing high to reach the sky.

Eventually he reached the top. Squeezing out through a woody window he found himself on a leafy branch, way up high under the night sky.

The branch was gently swaying backwards and forwards, this way and that, that way and this. Little Gnome had never felt this kind of movement before. And he had never seen such a view before. There were treetops all around him shimmering in the evening light. And up above in the night sky there were a thousand stars twinkling bright.

The story continues at the next stop…Revelations Design Studio in Packett’s Landing.

To begin the story go to the farthest tree to your left. 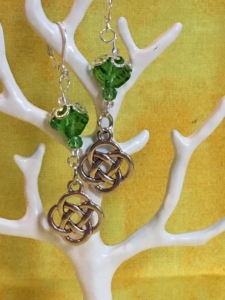